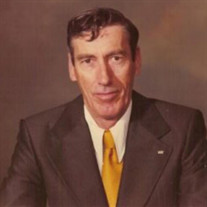 William Audell Copple passed away on May 24, 2019 in Val Verde Regional Medical Center in Del Rio, Texas. He was born in Schleicher County Texas in 1937 to Ira Audell and Cornelia E Copple. As a child he and his cousin spent a lot of their free time swimming in and playing around the Frio river. His first jobs were helping his Dad and uncle William feeding cows and other livestock and then chopping Cedar in the Hill country. He was introduced to his wife of 56 years Barbara L Edwards by her brother Raymon on October 8, 1960. They married June 8, 1962. They had 3 daughters. At age 19 on April 8 1957 he went to work at CP&L now AEP. He remained at CP&L 37 years. He earned the name Hurricane Willie because he and the line crew would travel to areas that had been hit by hurricane to restore power. He told many stories about those times. He often spoke of staying in motels that were surrounded by water and even at times the flood water would also enter the rooms they were staying in. He spoke of how hard the work was but also how rewarding it was. We would often go riding around Del Rio so he could point out new power lines that had been put in for the ever growing town he learned to love. He retired in 1993. In the years before his retirement he spent weekends in Campwood Tx. where he enjoyed helping his cousin work on his place there. After retirement he moved to Campwood on a place he had bought with a plan to live out his life there. However he ended up moving back to Del Rio where he remained until his passing. He loved to whittle and could make just about anything you can imagine He made toys, chains, riffles, cars…..He had the greenest of thumbs. He could break a branch off a tree stick in the ground and it would grow. He had wonderful gardens every year. He was also one of the kindest gentlest men you could ever hope to know. His heart was open not only to humans but also to his many pets throughout the years. He would mark their passing by writing their name and date of passing on the wall in his little room off the dining room. He also would rescue turtles from roadways. Many a car ride was interrupted so he could help one off the side of the road. There are so many things he did for and with us throughout the years we had many an adventure (much to our mom’s chagrin) Nailing a tent to th floor in the spare room for us to have a camp out, making us very tall stilts, placing a bed under a closet so we could jump off just to name a few. He was an avid outdoorsman fishing and camping on what is now Lake Amistad. He was preceded in death by his parents Ira A. and Cornelia E Copple, his siblings Ila Jo Welch and Edward A Copple. Left to cherish his memory are his beloved wife Barbara L Copple, Daughters Cornelia E Harrison and husband David, Arlene L Walcott, and Gwendolyn L Harrington and husband Daniel . Grandchildren Robert W. harrison (Vanessa), Savannah M Pryer (Liz), Michael A Harrison (Pam), Justin M Harrison, Travis W Christley (Emily), Hannah R Hatcher (Joel), Stephen A Walcott, and Kimberly A Walcott. 13 great grandchildren and many, many other family and friends.

William Audell Copple passed away on May 24, 2019 in Val Verde Regional Medical Center in Del Rio, Texas. He was born in Schleicher County Texas in 1937 to Ira Audell and Cornelia E Copple. As a child he and his cousin spent a lot of their free... View Obituary & Service Information

The family of William Copple created this Life Tributes page to make it easy to share your memories.

Send flowers to the Copple family.