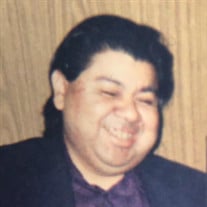 Tomas "Tommy" Martin Rangel, age 48, went to be with the Lord on Tuesday, February 16, 2021 here in Del Rio. He was born on July 13, 1972 in Del Rio. Preceding him in death were his parents, Maria E. and Tomas H. Rangel Jr.; nephews: Valentin... View Obituary & Service Information

The family of Tomas "Tommy" Martin Rangel created this Life Tributes page to make it easy to share your memories.

Tomas &quot;Tommy&quot; Martin Rangel, age 48, went to be with the Lord...

Send flowers to the Rangel family.