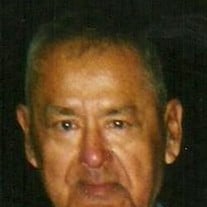 Rudolfo Martinez went to be with the Lord Sunday, May 18, 2014, at the age of 85. He was born May 10, 1929, in Del Rio, Texas, to Alberto Martinez and Maria Lopez Martinez. He was preceded in death by a sister, Irma Alcorta. Rudy served in the U.S. Navy from 1951 – 1959 and served during the Korean War. He served aboard the USS Sperry and on the USS Randolph as a Chief Petty Officer. He then married the love of his life, Sara Garcia on June 25, 1960. “Yapa,” as he was known by his family and close friends, is survived by his loving wife, Sara G. Martinez, and by his sons, Rodolfo “Rudy” Martinez (wife Myrna C.) of Phoenix, Arizona, and by Ricardo “Rick” Martinez (wife Linda) of Del Rio. He is survived by his 3 grandchildren: Derrick, Nicholas, and Mia Chanel Martinez; his only great-granddaughter is Zurie Martinez. He is also survived by his brothers: Alberto Martinez (wife Romelinda) and Arturo Martinez (wife Mercedes); his sisters include: Dolores Ortiz, Alicia Chavez, and Maria Elena Alderete. Rudy was a member of the American Legion Post #595 for over 30 years. He was a member of the American G.I. Forum; he served as a member of the Honor Guard for over 25 years. He was a fixture of the Del Rio Ram Football Program where he volunteered his time in The Chain Gang for over 17 years and was a great supporter of the Del Rio Ram Baseball teams. He was a San Felipe Mustang ‘til the end. Visitation will take place Tuesday, May 20, 2014, from 5:00 – 9:00 PM at the Trinity Mortuary Chapel. A Holy Rosary will be recited at 7:00 PM. A Mass of Christian Burial is scheduled for Wednesday, May 21, 2014, at 9:00 AM at St. Joseph Catholic Church with Father Clay officiating. Interment will follow at Sunset Memorial Oaks Cemetery. Full Military Honors will be conducted by the United States Navy Honor Guard and by the American Legion Post #595. Pallbearers are: Nicholas and Derrick Martinez, Herbert Blanks, and Arturo, Alberto, and Henry Martinez. “Fair Winds and Following Seas” Funeral arrangements are under the care and direction of Trinity Mortuary, 206 Kings Way, Del Rio, Texas, 78840. Please visit our website, www.trinitymortuary.com and our Facebook page.

Rudolfo Martinez went to be with the Lord Sunday, May 18, 2014, at the age of 85. He was born May 10, 1929, in Del Rio, Texas, to Alberto Martinez and Maria Lopez Martinez. He was preceded in death by a sister, Irma Alcorta. Rudy served in... View Obituary & Service Information

The family of Rudolfo "Yapa" Martinez, Sr. created this Life Tributes page to make it easy to share your memories.

Send flowers to the Martinez, family.