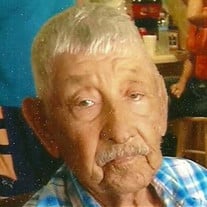 Rito Moreno, age 87, passed away surrounded by his loving family on Friday, February 24, 2017 at the Main Methodist Hospital located in San Antonio, Texas. He was born August 20, 1929 in Catarina, Texas. Preceding him in death was his daughter,... View Obituary & Service Information

The family of Rito Moreno created this Life Tributes page to make it easy to share your memories.

Rito Moreno, age 87, passed away surrounded by his loving family...

Send flowers to the Moreno family.