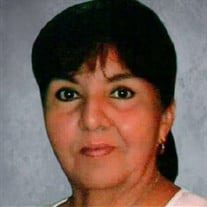 Micaela B. De La Garza, age 66, entered into rest on Monday, July 18, 2016 at the Christus Santa Rosa Hospital located in San Antonio, Texas. She was born September 19, 1949 in Del Rio. Preceding her in death was her husband of 32 years, Francisco... View Obituary & Service Information

The family of Micaela Berreles De La Garza created this Life Tributes page to make it easy to share your memories.