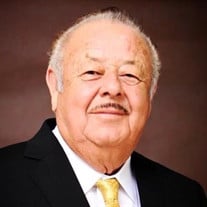 Surrounded by his wife and children, Mario Flores Alfaro entered eternal life on Friday, July 23, 2021. Mario was born May 4, 1940 in Ciudad Acuña, Coahuila, Mexico to parents Mario and Maria Manuela Alfaro. Losing his father at a young age, Mario was raised by a loving and dedicated mother whom he cared for until her death at age 99. A loving husband, father and grandfather, Mario married the love of his life, Rosa Maria on February 24, 1963. Together they raised their children residing in Ciudad Acuna until 1975 when they made Del Rio, Texas their new home. Mario was a man of the border, raised and educated in two countries, completing his primary studies in Ciudad Acuña, and graduating from San Felipe High School in 1960. He embraced both countries as his home, building lifelong friendships and a career that spanned decades of contributions as a technician in both Acuna and Del Rio. Mario’s work at XERF radio station helped catapult rock-n-roll music into mainstream America. With his visionary and persevering spirit, Mario was always in step with technology working as a technician at XERF, SEARS, LAFB, GTE, Indiana Data and his final years as a technician and consultant for Currey Adkins. He was preceded in death by his parents Mario and Maria Manuela Alfaro and infant brother Enrique. Left to cherish his memories include his wife of 58 years, Rosa Maria Alfaro; his son, Mario Alfaro III; daughters, Rosa Maria Aguilar (husband Enrique), Leticia Molina (husband Albert), Susana Cantu (husband J.E.), and Mary Torres (husband Roger); grandchildren: Debbie, Isabel, Briana, Juan, Javier, Kassandra, and Roger Jr. He began his life of faith at his baptism in 1943 and was strengthened by his Catholic faith and the sacraments throughout his life. With a “confident belief that death is not the end, nor does it break the bonds forged in life” we invite family and friends to celebrate the life of this most humble, kind, and faithful servant of God, Mario Flores Alfaro. Visitation will begin Friday at 6:00 P.M. with a Vigil Service and Rosary to be recited at 7:00 P.M. Funeral Mass will be offered Saturday at 9:00 A.M. at Our Lady of Guadalupe Catholic Church. Burial will follow at Sunset Memorial Oaks Cemetery.

The family of Mario F. Alfaro created this Life Tributes page to make it easy to share your memories.

Surrounded by his wife and children, Mario Flores Alfaro entered...

Send flowers to the Alfaro family.