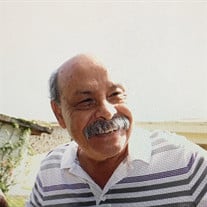 Juan Diaz Leon, 71, of Del Rio, went to be with his Lord on Sunday, May 26, 2019 in San Antonio, Texas while surrounded by his wife, children, and grandchildren. He was born March 31, 1948 in Mexico City, Mexico. He is preceded in death by his father, Juan Leon, and mother, Teresa Diaz. He grew up in Mexico City until the age of twelve. He later attended seminary school, graduating from Diosesano in Saltillo, Coahuila, Mexico in 1965. He immigrated to the United States in 1979 and became a U.S. Citizen in 1988. He worked at the San Felipe Country Club for twenty years. In 1990, he began his career at Laughlin Air Force Base where he retired after twenty-one years of government service. He was a devoted member of St. Joseph’s Catholic church. He enjoyed spending time with his family and working in his yard and garden. He will be remembered for his friendly personality and contagious laugh. His absence will be felt by everyone who knew and loved him. He is survived by his wife Luz Angelica Leon of 47 years; son Juan Leon Jr. and daughter-in-law Lupita Leon, son Sergio Leon and daughter-in-law Brandy Leon, daughter Brenda Flores and son-in-law Eduardo Flores all of Del Rio, TX, and son Emmanuel Leon and daughter-in-law Rachel Leon of San Antonio, TX; grandchildren Clarissa, Alexander, Isabella, Ari, Alexa, Amaris, Sophia, Olivia, and Benjamin Leon, Natalia and Mia Flores; brothers Eliseo, Jesus, Agustin, Luis, Frank, and Manuel; sisters Magdalena, Isabel, Teresa, Maria Luisa. He is also survived by numerous brothers and sister-in-laws, nieces and nephews. Visitation will be held on Saturday June 1, 2019 from 9 A.M.- 12 noon. On Saturday June 1, 2019 A Chapel Service will be held at the funeral home chapel from 10 A.M. – 11 A.M. A Catholic Mass will be held on Saturday June 1, 2019 at St. Joseph’s Catholic Church at 1 P.M. Funeral arrangements are under the care and direction of Trinity Mortuary, 206 Kings Way, Del Rio, Texas, located in Ceniza Hills. For more information you may contact us at (830) 775-2230 or www.TrinityMortuary.com. Tradition. Tribute. Trust.

Juan Diaz Leon, 71, of Del Rio, went to be with his Lord on Sunday, May 26, 2019 in San Antonio, Texas while surrounded by his wife, children, and grandchildren. He was born March 31, 1948 in Mexico City, Mexico. He is preceded in death by... View Obituary & Service Information

The family of Juan D. Leon created this Life Tributes page to make it easy to share your memories.

Send flowers to the Leon family.