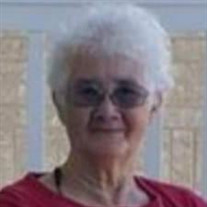 On Friday March 1, 2019 Irene Di Marco dedicated mother, grandmother and great grandmother went to be with the Lord at the age of 86. She was born in Nueva Rosita, Mexico on November 20, 1932. Irene started bowling at the age of 41 and worked... View Obituary & Service Information

The family of Irene Di Marco created this Life Tributes page to make it easy to share your memories.