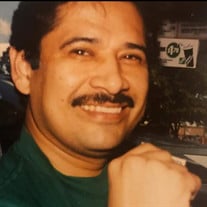 Gilbert Cervantes Jr, formerly of Del Rio, Texas, passed away on Tuesday April 13, 2021 at the age of 66. He is survived by his wife Tracie Cervantes, daughters Sarah, Sophia, Karina (Guffey), Tammi and Jim (Pattison), son Gilbert III and Katrina, grandchildren Eva (Guffey), Tre , Ashlynn, and Laurynn (Pattison), Gilbert IV, Logan, and Everly (Cervantez), brother Jerry Cervantez and spouse Abelina, brother Gus Cervantez and spouse Mari, sister Rosa Salas, and many beloved nieces and nephews; as well as his extended family of Jehovah's Witnesses whom he loved dearly. Gilbert was preceded in death by his father Gilberto Cervantez Sr and mother Natividad (De La Cerda) Cervantez. Gilbert grew up in a family of hard-working migrants, and happily recalled memories from times spent in Eagle River Wisconsin, where the family spent various seasons working in the fields. Everytime he spoke about growing up with his brothers and sister, he did it with a smile. Aside from time dedicated to working in the fields with his family while growing up, Gilbert also spent years as a restaurant manager for "El Chico" Mexican Restaurant, Wendy's, and Wyatt's Cafeteria to name a few, as well as time as a case worker for the Texas Department of Human Services, prior to being forced to retire due to a back injury. This did not stop him from continuing the work that he believed was most important in his life, serving Jehovah God. Gilbert spent many years, throughout his young adulthood up until his death, learning and preaching the word of God, and helping those he could along the way. One of his proudest accomplishments, Gilbert was given the opportunity to serve at Bethel, the World Headquarters of Jehovah's Witnesses, shortly after graduating from High School in Del Rio, Texas. Later on in life, after serving in the congregation for many years, Gilbert was appointed as one of the Del Rio Spanish Congregation's elders, continuing his service and fully dedicating himself to help those in the congregation that were in need. After meeting and marrying his 2nd wife, Tracie, Gilbert made the change to the English Congregation of Jehovah's Witnesses in Del Rio, Tx, where he continued serving as an elder while he was physically able to do so. Aside from his religion and family, Gilbert loved his animals, loved watching corny science fiction movies, and watching the Pittsburgh Steelers with his son when they won. He always looked forward to visits from his grown children, he enjoyed his day to day life with the youngest daughters of his small tribe, and making life adventurous with his wife Tracie. He loved working outside in the yard, whether it was cutting grass, planting flowers and trees, using gasoline to rid the area of fire ants (despite failing), or climbing up on the roof for maintenance needed. He was a hard-working, good man. Gilbert was a dearly loved husband, father, brother and son, and will be greatly missed.

The family of Gilbert Cervantes Jr created this Life Tributes page to make it easy to share your memories.

Send flowers to the Cervantes family.