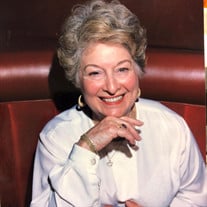 Elizabeth Sue Murdoch peacefully entered into the arms of her Lord on Wednesday, September 1, 2021, in Del Rio, Tx. She was born in Dallas, Texas on February 14, 1933, to her predeceased parents, Eugene Homer Hopkins and Susie Inez Vaughan Hopkins. Her brother, Homer Eugene Hopkins and her sister, Ina Gene Hopkins Evans also preceded her in death. She married James (Jim) Murrell Murdoch on September 12, 1951, in Dallas, Tx. From their marriage they had two children Vicki Sue Murdoch Judice and James (Jimmy) Lawrence Murdoch. Sue and Jim were longtime residents of Mesquite, Texas before moving to Del Rio in 1976 when they became owners of Coors of Del Rio. Sue’s husband, Jim, died October 2, 2004. Sue was a vibrant, beautiful lady who enjoyed the joy of her family, her extended family in the Dallas area, as well as the many friends she made in the Mesquite and Del Rio communities. Sue’s favorite time of the year was Christmas and celebrating the birth of her Savior. She enjoyed greatly decorating her home and participating in the local Christmas festivities. Sue was a devoted and lifelong member of the First United Methodist Church of Del Rio where she was a faithful member of the Wesleyan Sunday School Class and served in various positions to support her church. She was also active in the Pan American Round Tables of Texas for over 37 years and served on the board of The Friends of Hospice. Survivors include her daughter Vicki and son-in-law Kevin L. Judice of The Woodlands, Tx, and son Jimmy and daughter-in-law Tibby Quick Murdoch of Del Rio, Tx. Grandchildren include Catherine Elizabeth Judice Savage (Joe), William Hall Judice, Lockett Murrell Murdoch and Jimie Glee Murdoch. Sue’s great grandchildren are James Benjamin Savage, Henry Thomas Savage and Jinks Sterling Murdoch-Hill. She is also survived by cherished friends and daily companions, Susanna Gutierrez and Danny J. Roberson. Sue’s family would like to thank the dedicated medical professionals and staff at Val Verde Regional Medical Center for the outstanding care and genuine kindness they provided to our mom and Nanny. Sue will be greatly missed but we know she is in the arms of God who welcomed her home with those assuring words, "Well done thy good and faithful servant. You have fought a good fight; you have finished the race; you have kept the faith!" In lieu of flowers, the family requests that donations be made in Sue’s memory to the First United Methodist Church of Del Rio, Tx or to St. Jude Children’s Research Hospital

Elizabeth Sue Murdoch peacefully entered into the arms of her Lord on Wednesday, September 1, 2021, in Del Rio, Tx. She was born in Dallas, Texas on February 14, 1933, to her predeceased parents, Eugene Homer Hopkins and Susie Inez Vaughan... View Obituary & Service Information

The family of Elizabeth "Sue" Murdoch created this Life Tributes page to make it easy to share your memories.

Elizabeth Sue Murdoch peacefully entered into the arms of her...

Send flowers to the Murdoch family.