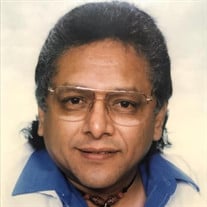 Dr. Noé M. Musquiz, M.D., age 71, entered into eternal rest on Wednesday, February 23, 2022, in Del Rio, TX. He was born on March 24, 1950, in Robstown, TX. Dr. Musquiz was the son of migrant farm workers. He traveled the country with his family picking fruits, vegetables, and cotton. His parents insisted on a strong education for their children even throughout their travels. He enjoyed reading since an early age, as well as, playing baseball in Robstown. He completed his high school education in Dallas, Texas, and served in the US Navy as a Fire Control Technician aboard the USS John King in Vietnam. He received an honorable discharge. Upon return to the DFW area, he met el amor de su vida, Janie. With her encouragement and support, he began his collegiate journey at El Centro College in Dallas. He received his undergraduate degree from The University of Texas at Dallas and his medical degree from the Medical College of Wisconsin in Milwaukee. During his undergraduate career he earned a spot in a coveted summer session at Harvard University. While studying, he gained the respect of peers and faculty and was invited back as a visiting professor the following summer teaching cell biology. More importantly he boasted about cooking the first fajitas at Harvard! Throughout his educational journey, he was actively involved in the Chicano movement through various student organizations. While in medical school, he served on admission committees and helped to recruit under represented populations into medical school. He was recognized by his medical school classmates for his commitment to serve Spanish speaking communities by organizing, leading, and advising several Chicano community planned services. Upon completion of medical school, Dr. Musquiz sought out medically underserved communities in Texas including Cotulla, Carrizo Springs, and finally making his permanent home in Del Rio, Tx. He was passionate about the care he provided for his patients over 35 years and the relationships built. Dr. Musquiz enjoyed planning fundraisers for various charitable causes, community outreach with a focus on encouraging youth to read and educate themselves, and helping to create pathways to higher education through academic scholarships. Above all, his devotion and love to his wife, children, and grandchildren was his utmost priority. He will be remembered for his love of fishing, Bar-B-Q, and conjunto music. Preceding him in death were his parents, Juan Y. and Antonia Musquiz; siblings, Ruben M. Musquiz and Vicenta M. Musquiz; and in-laws, Herminio and Manuela Regino. Family members left to cherish his memory include his beloved wife od 49 years, San Juana “Janie” Musquiz of Del Rio; children: Astro D. Musquiz and wife, Karina, of Arlington, TX, Munylda Musquiz-Ortiz and husband, Abraham, of Del Rio, and Marysol Y. Musquiz, also of Del Rio; siblings: Francis Vielma of Corpus Christi, TX, Juan Musquiz III and wife, Janie, of Corpus Christi, TX, Anita Leal and husband, Diego, of Dallas, TX, Margarita McCusker and husband, Marc, of Las Vegas, NV, Amelia Morales of Dallas, TX, and Jorge Luis Musquiz and wife, Lucinda, of Dallas; grandchildren: Abram Noel Ortiz, Myzael T. Musquiz, Tristan A. Mitchell, Noah Campbell, and Saul Inri Musquiz. Dr. Musquiz is also survived by his sisters-in-law and numerous nieces and nephews. Visitation will be held on Wednesday, March 2, 2022, from 5 to 9 p.m. in the Trinity Chapel of Faith. A Holy Rosary will be recited at 7 p.m. A Funeral Mass is scheduled for Thursday, March 3, 2022, at 10 a.m. at St. Joseph’s Catholic Church. Pallbearers will be: Juan Musquiz III, Abraham Ortiz, Abram Noel Ortiz, Patricio Rodriguez, Sr., Jose Luis Ibarra, and Andrew Villarreal ; Honorary Pallbearers: Jorge Luis Musquiz and Cesario Delgadillo. Public services will conclude after the Funeral Mass. Private family services to follow.

The family of Dr. Noé M. Musquiz, M.D. created this Life Tributes page to make it easy to share your memories.