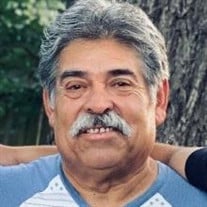 Carlos "Charlie" Orozco, age 61, went to be with the Lord on Saturday, August 1, 2020 in San Antonio, Texas. He was born on January 15, 1959. Preceding his in death were his parents, Santa Gloria and Juan Cirilo Orozco; Family members left... View Obituary & Service Information

The family of Carlos "Charlie" Orozco created this Life Tributes page to make it easy to share your memories.

Send flowers to the Orozco family.