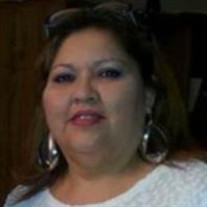 Brenda Leigh Felan-Hidalgo, at age 55, passed away in San Angelo, Texas on Saturday 3/21/2020 at Shannon Medical Center. Brenda was born January 23, 1965 in Snyder, Texas to Inez Penilla & Juaquin Felan Sr. She was raised amongst her siblings: Harvey Hinojos, Irma Felan, Juaquin Felan Jr, and Veronica Gaitan throughout the years. Brenda attended: Goliad Elementary, Lincoln Middle School, and Lakeview High School. Brenda, as we all knew her, was persistent, very strong willed, and a strong woman! One of her proudest educational moments was when she stood at her mother’s door and presented her Cosmetology license, she completed at Texas College of Cosmetology in the early 90’s. She also received her certificate of completion for Photography from Angelo State University. Brenda also devoted some time as a CCD Teacher at St Joseph’s Catholic Church. Brenda gave birth to her daughter Barbara Felan in 1983 and then her son Joseluis Martin in 1986. From her former marriage, Brenda also raised Carlos Martin and later his son Carlos Martin Jr as her own. She worked at Alicia’s Beauty shop for many years and then acquired the business: Brenda’s Beauty Shop & Laundry Mat. When she wasn’t helping others be a better version of themselves by cutting their hair, she loved being on the water, fishing, family gatherings, playing Mexican Loteria, and gracing everyone she could with her amazing cooking. In 2009 Brenda met Sipriano Hidalgo and their love flourished. Soon after they moved to Siprianos’ home town, Del Rio, Texas. They married in the Spring of 2015. On February 22, 2011, she gave birth to her youngest son Sipriano; who she proudly called “Baby Sip”. She truly cherished the time she was able to spend with him after becoming a stay at home mother. They would both love spending time with her bull terriers Tequilla & Cash. Brenda is survived by her husband: Sipriano Hidalgo of Del Rio, Texas; mother: Inez Penilla; In-laws: Pedro and Maria Hidalgo of Del Rio, Texas; children: Barbara (Tony), Joseluis (Christine), “Baby” Sipriano, Carlos (Lydia), and Carlos Jr. “CJ”, grandchildren: Irma, Mya, Rey, Angelica, Faith, Ernest, AJ, and Austin; great-grandchild: Ashton; siblings: Harvey Hinojos and Veronica (Amanda); nephews and nieces: Steven (Daisy), Lucinda, Kristy, Cassandra, brother-in-law: Raul (Griselda) of Dallas, Texas and Pedro Jr. of Del Rio, Texas; and sister-in-laws: Norma and Carolina both of Del Rio, Texas; Special friends: James (Eva) and Ellie May, and numerous cousins and extended family. She is predeceased by her father: Juaquin Felan; siblings: Irma and Juaquin Jr.; Grandparents: Augustine & Matianna Penilla. Services will be Saturday March 28, 2020, 11 AM, graveside in Del Rio, Texas at Westlawn Cemetery. Arrangements are being handled by Trinity Mortuary. While we all would have loved to have everyone who wished to attend, we are living in difficult times and are only able to have limited attendance under the tent. We ask that all else who do attend follow all CDC gathering, social distancing, and sanitary guidelines. We appreciate your cooperation and understanding. We want to give a very special thank you to her in-laws, Pedro & Maria Hidalgo who helped her through her most difficult times of illnesses these past years; never leaving her side and have and will continue to help care for her youngest son, Baby Sip. For Brenda we hope you know: AN ETERNAL MEMORY… Until we meet again, those special memories of you will always bring a smile. If only I could have you back for just a little while. Then we could sit and talk again just like we used to do, you always meant so very much and always meant so very much and always will do too. The fact that you’re no longer here will always cause me pain, but you’re forever in my heart until we meet again. Rest in paradise.

Brenda Leigh Felan-Hidalgo, at age 55, passed away in San Angelo, Texas on Saturday 3/21/2020 at Shannon Medical Center. Brenda was born January 23, 1965 in Snyder, Texas to Inez Penilla & Juaquin Felan Sr. She was raised amongst her siblings:... View Obituary & Service Information

The family of Brenda Leigh Felan- Hidalgo created this Life Tributes page to make it easy to share your memories.

Brenda Leigh Felan-Hidalgo, at age 55, passed away in San Angelo,...