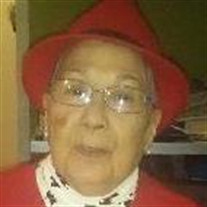 The former owner of the "Tamale Hut" in Del Rio Texas has gone to be with the Lord. She passed on Friday, August 25, 2017 at 2 p.m. in San Angelo, Texas. Alicia was married to Eliseo G. Roman, of Del Rio Texas on September 5, 1959. Preceding... View Obituary & Service Information

The family of Alicia Rivera Roman created this Life Tributes page to make it easy to share your memories.

The former owner of the &quot;Tamale Hut&quot; in Del Rio Texas has gone...

Send flowers to the Roman family.